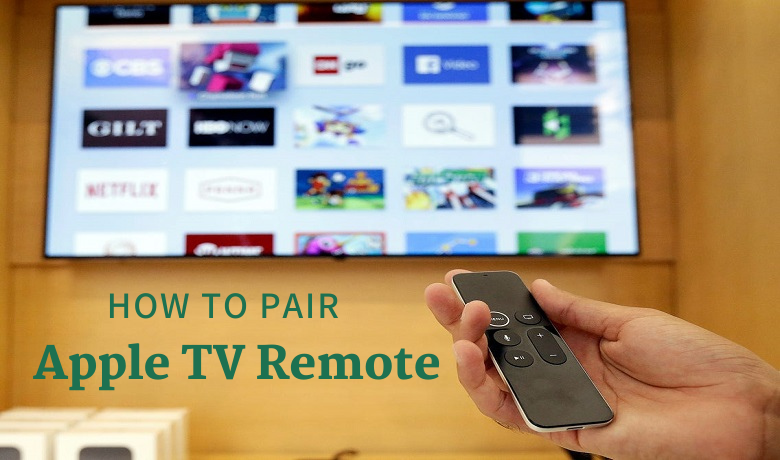 Apple TV is one of the most versatile streaming boxes available on the market and is the same as the Firestick that converts your Regular TV to a smart TV. You can do anything from playing games, watching your favorite series or movies, and much more without the need to connect to your devices like smartphones, PC, or other devices. Apple TV comes with a remote to control your Apple TV device. However, you need to follow the proper procedure to pair your Apple TV remote. Otherwise, you will be put up in a difficult situation where you can’t control your Apple TV with the Unpaired Apple TV remote. So, here we will discuss all the possible ways to pair Apple TV remotes.

How to Pair Apple TV remote with Apple TV

There are five types of Apple TV. They are:

So, let us see the pairing procedure for the Apple TV remote with all the models of your Apple TV.

(2). Insert the battery on your Apple TV remote.

(3). Now, you can see the white light blinking on your Apple TV device.

(5). Then, press and hold the Menu and Right button on your Apple TV remote simultaneously for six seconds.

With Apple TV 4K, you will receive a brand new Siri remote. So, follow the pairing procedure of your fourth generation Apple TV remote below.

(2) Maintain a distance of three inches between your remote and Apple TV.

(3) Press and hold the Menu button and Volume Up button for five seconds.

There are two types of Apple TV 4K. They are:

For the second generation Apple TV 4K, you can find the pairing process of the Apple TV 4K remote below.

(3) Press and hold the Back and Volume Up buttons simultaneously for five seconds.

(5) Now, you can see the confirmation message on the screen that your Apple TV remote has been successfully paired.

How to Unpair Apple TV Remote

1. Initially, launch the Settings app from your home screen.

2. Further, select the General option on the menu.

3. Choose the Remotes option from the menu.

4. Further, select the remote that you wish to unpair.

6. After unpairing the remote, you can find a symbol resembling a broken chain link over the remote icon.

7. Now, you can pair a new remote to the device.

1. Replace the battery on your Apple TV or charge it.

2. Make sure your Apple TV is updated to the latest firmware.

Also, we are live on Facebook and Twitter. So, you can ask your queries on the respective social media pages.

Can you pair a new Apple TV remote with an old Apple TV?

How to Install and Watch Funimation on Apple TV

How to Listen to Music using Deezer on Apple TV