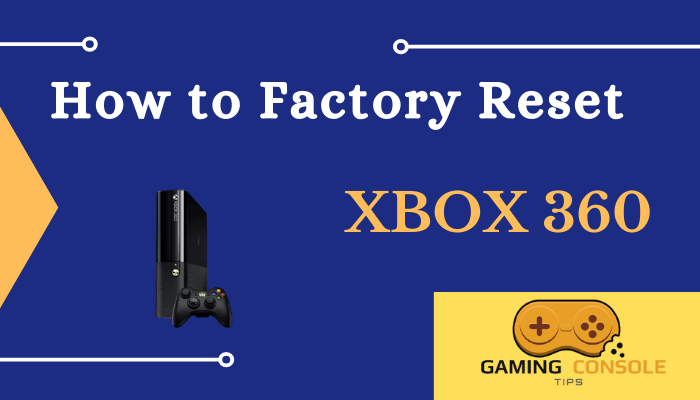 When your Xbox 360 is underperforming, or you face any other difficulty in playing the game, you could try the factory reset option in the console for better performance. Factory Reset refers to deleting all the data in the device and transforming it to the default settings.

You can know the serial number of your console in two ways.

Method 1 – Look at the Back of Console

Disconnect your Xbox 360 console, and look at the back for a white label with a bar code.

Look for the label Serial Number and the 12-digit number next to it.

Method 2 – From the Xbox 360 Settings Screen

[2] Press the Guide button on your Xbox 360 controller and go to the Settings menu.

[3] Scroll down and choose the System Settings on the Settings menu.

[4] Select the System Info in the Console Settings menu.

[5] Note down the value of the first item on the System Info screen next to the label Console Serial Number.

“This would be required when formatting the hard disk or while performing Factory Reset.“

How to Clear Xbox 360 Cache

You can clear the cache on the Xbox 360 to solve issues like File System errors, version-related crashes or warnings, app update conflicts, and save game write errors.

[1] Press the Guide button on the controller to get the menu.

[2] Navigate to the Settings tab using your Xbox 360 controller and select the System Settings on the menu.

[3] Select Storage on the System Settings.

[4] Choose the Hard Drive on the Storage Devices to open.

[5] Choose the Clear System Cache on the Device Options.

[6] Select Yes in the prompt to proceed with the Clear System Cache operation.

[7] Once the system cache is cleared, reboot your Xbox 360 console.

You have to take a backup of data beforehand to prevent important data loss while resetting. The Backup can be done in two ways. They are backup the entire Hard Disk and select the desired games/ data for backup.

[1] Connect an external USB hard drive or thumb drive to your Xbox 360.

[2] Go to the Settings and select System Settings on the menu.

[3] Choose the Storage option in the System Settings.

[4] Use Xbox 360 controller to select Hard Drive in the Storage devices.

“On the next screen, a prompt named Select a Device would let you select devices to back up the Hard Drive content.”

[6] Select the USB Storage Device or any other device, in case you connect an SSD or a USB HDD.

[7] Select Yes in the prompt to start the backup process.

[1] Plug an external USB HDD or a thumb drive into the Xbox 360 console.

[3] Choose the Storage option on the System Settings.

[5] Choose the Games and Apps on the Hard Drive.

[6] A menu would appear on the next screen. Use the controller to select the desired game to backup.

[7] Select the Move option on the vertical menu and tap button A on the face buttons side.

“It may be labeled different to what is shown below if you are using a USB SSD or HDD.”

[9] Once you have identified your USB Storage Device, tap the Y button on the controller to start the backup process.

You need to wait for the backup process to finish and repeat it for other games and apps if required again.

Related: How to Restart Xbox 360

You can reset your Xbox 360 to factory settings with the format option in the System settings.

[1] Switch on Xbox 360 console and wait for the home screen to load.

[2] Go to the Settings and select the System Settings screen.

[6] Choose the Yes option in the prompt.

[7] Select the Enter Serial Number option in the next prompt.

[8] Enter your Console Serial Number in the Input field on the next screen and click Done.

It takes a couple of minutes for the system to complete the formatting of the Hard Drive. After reset, you have to set up the Xbox 360 console from scratch as a new device. This reset will also reset your Xbox 360 controller.

What happens if you reset your Xbox 360?

When you factory reset your Xbox 360 console, your entire data is on HDD, including account settings, Xbox Live account, and any other settings on Xbox 360 console would be restored to the factory defaults.

Can a reset once in a while save my Xbox 360 from the ring of death?

No. Reset is a good choice to keep your Xbox 360 performing well.
But a lot of other physical factors may cause your Xbox 360 to become bricked.

Factory Reset doesn’t harm your Xbox 360 console, even if you end up doing it multiple times.

Is there a chance of bricking my Xbox 360 console if there is a power failure during Reset?

Yes, unless the hard disk is USB or SSD. The Conventional hard disk inside the Xbox 360 would be busy during the reset operation, deleting all the contents while spinning really fast.
A power failure would mean high chances of a hard disk failure by motor seizure, input or output head failure, or a short circuit in the HDD controller board.

How to reset Xbox 360 Passcode?

Go to the Settings >> Family and enter the Passcode. If it is an incorrect passcode, choose the Reset Passcode option. You have to answer the preset question to master reset the Xbox 360 passcode.