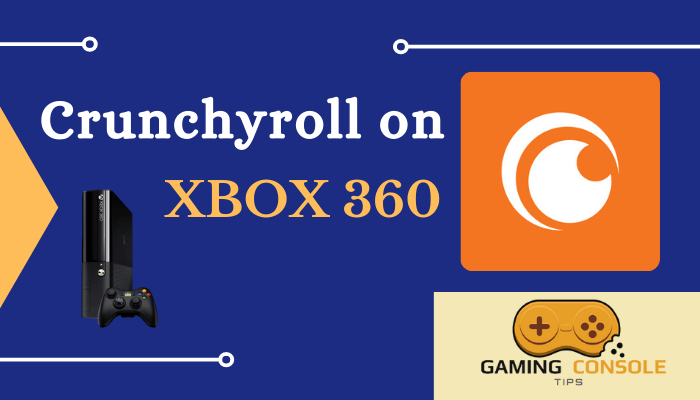 Crunchyroll is a popular streaming service for anime. It has gained a lot of users over the years. The app is available across 200 countries because of its excellence in service. It focuses mainly on the Asian anime series and maintains ties with several Asian companies. As a result, viewers can enjoy most of their favorite anime shows on Crunchyroll on the same day of the release. Crunchyroll is compatible with gaming consoles, including Xbox 360 and Xbox One. You can watch your favorite anime on the Xbox 360.

The best part of Crunchyroll is that it is available for free. Though Crunchyroll offers an ad-supported free version, it also has three membership tiers.

Fan– This is the basic version which costs $7.99/month. It offers an ad-free experience to users.

Mega Fan tier costs $9.99/month. Apart from ad-free viewing, this plan includes additional benefits such as offline viewing, $15 off for every Crunchyroll Store purchase worth $100 every three months, etc.

[1] Open the browser and go to the Crunchyroll Official Website.

[3] On the next page, you will get options to Sign up as well as to log in.

[6] Next, choose your Subscription plan. One can start with 14 days free trial. Otherwise, one can try the ad-supported version of this streaming service for free.

[8] Finally, one can start streaming anime from Crunchyroll.

How to Install Crunchyroll on Xbox 360

[1] Turn on your Xbox 360 and make sure it is connected to the internet connection.

[3] Tap the Search icon and enter Crunchyroll in the search bar.

[4] Choose the Crunchyroll app on your Xbox 360 suggestion list.

[5] Tap the Get button to install the Crunchyroll app on Xbox 360.

[6] The downloading process will begin as a result.

[7] Open the app and enter your login credentials to start streaming Crunchyroll on your Xbox 360.

Related: How to Stream Crunchyroll on Nintendo Switch

Yes, you can watch Crunchyroll on Xbox 360. All you need to stream anime is an Xbox Live account and Crunchyroll account.

[2] What can I watch on Crunchyroll?

Crunchyroll has a huge library with vast anime content. One can stream shows and movies, games, live-action dramas, and Japanese comics and manga on Crunchyroll. It is available in 200 countries and the app possesses nearly 30000 anime content.

Crunchyroll has a free version that is ad-supported. There is no offline viewing with the free version. However, there are three-tier subscriptions available on Crunchyroll- Fan, Mega Fan, and Ultimate Fan for more luxurious usage than the free one. It also offers a free trial for all subscription plans.

How to Install and Broadcast Twitch on Xbox One

How to Connect AirPods to PS5 [PlayStation 5]

Aspiring writer who precisely focused on technical content. One of many who loves tech gadgets.