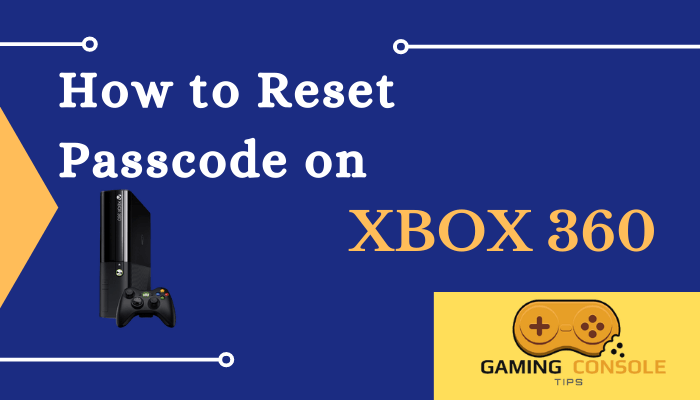 Why should You Set Passcode on Xbox 360

[1] The first and foremost reason to set a passcode is to have control over the activities of your children or family on Xbox 360.

[2] You can set a time limit for console usage. Xbox 360 provides an option to set daily and weekly timers to limit your family’s console usage.

[3] There are options to restrict games and content (movies, TV shows, Series) on Xbox 360. Parents can decide what their children can play or watch on the console using this feature. One can also set restrictions based on rating.

[4] Parents can allow or deny access to Xbox Live. Also, they can restrict the creation of new Xbox Live memberships without their approval.

[5] Setting the passcode to Xbox 360 will allow the parents to determine the changes in its settings. The existing passcode is the key to resetting a new passcode on Xbox 360. It is also necessary to reset the Xbox 360 to Factory Settings.

How to Reset Xbox 360 Family Passcode

[2] Scroll down and select the Family option.

How to Reset Passcode on Xbox 360

In case you wish to reset a passcode and can’t remember the existing passcode, you can reset the Passcode by answering the preset questions.

[1] Go to Settings on your console.

[3] Now, the page where you have to enter the Existing passcode opens.

[4] If it shows Incorrect Passcode, choose the Reset Pass Code option at the bottom.

[5] Microsoft has an option to reset passwords on Xbox 360 using the Security question set during device registration.

[6] Answer the Security Question and then tap Done.

Note: People with Microsoft adult accounts can only get control over the console and reset the passcode of the Xbox 360.

Alternatively, one can also reset the family passcode on Xbox 360 using the Microsoft account. This method will reset your console to its original settings without affecting the games, game data, and profiles.

[1] Go to your Microsoft account to manage devices using a web browser.

[5] Choose Reset Passcode to change the family passcode of your console.

[6] A new window opens with the passcode to reset your existing passcode on Xbox 360.

[9] Choose System Info and then enter the Passcode noted down from Microsoft webpage.

[10] Confirm by tapping Yes to restore your Xbox 360 to the factory setting. As mentioned, this will not affect any other gaming data or profile on your console.

[11] As a result, your system will reboot, and you can start setting the content control now. Similarly, you can also set a new family passcode to your Xbox 360 after the reboot.

It is not mandatory to set a family passcode for your Xbox 360 console. However, it has its own advantages to taking control of the console and its activities. Especially it is useful when you have kids using the console. This is the reason why Microsoft allows users with an adult account to handle the content control as well as set or reset the family passcode.

How to reset the passcode on Xbox 360?

On your Xbox 360, go to Settings and then choose the Family option. Enter the existing passcode and click on Change passcode to reset the passcode on Xbox 360.

Can you reset Xbox 360 family passcode if you can’t remember it?

Yes. One can reset the Xbox 360 family passcode without the existing passcode. However, you need to know the answer to the security question. If not, you have an option to reset the passcode from the Microsoft account if you have registered the Xbox 360 to it.

How to Get and Play Apple Music on Xbox One

How to Watch MLB TV on PS5 [PlayStation 5]