How to Restart PS3 [PlayStation 3] 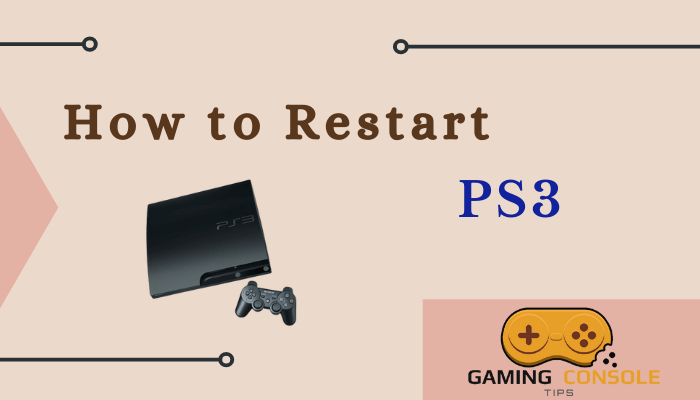 If your PS3 is freezing and causing an interruption in its performance, then you must try to restart it. Yes, a restart is a simple solution to fix both hardware and software issues on most devices, including PS3. Especially, PlayStation 3 is prone to excessive freezing or lagging problems. There are a few reasons for your PS3 to freeze often, like over-heating, RAM or GPU failure, file system corruption, etc. Unlike a reset, the restart will not affect the stored data and settings on your PS3. Therefore, before attempting a factory reset, restarting your PS3 might help in certain cases so that you will not lose your games and data.

When your PS3 console is totally frozen and you cannot operate it using the controller, a manual restart is recommended.

[1] Tap the Power button on your PS3 console to bring it to Standby.

[2] Then, press and hold the Power button for about 30 seconds.

[3] From standby, your PS3 will turn off after three rapid beeps.

[4] After a few seconds, you have to press the Power button again to Restart your PS3.

[1] While your console is on and working, press the PS button on your controller.

[2] Scroll down and choose the Turn off system option using the X button on your controller.

[3] You will have to click Yes, to confirm turning off your console.

[4] Now your PS3 will turn off so that you can restart it.

[5] You can notice the red light on the power indicator when it is turned off.

[6] After a few seconds, press the PS button on your controller.

[8] Choose your Account and your PS3 XMB will be ready to use.

Related: How to Record Gameplay on PS3

[1] Turn off your PS3 using the Power button on your console. If your console is already turned off, ignore this step.

[2] Press and hold the Power button until you hear three beeps.

[4] Again, press and hold the Power button on your console. This time you will hear two beeps as usual and the third beep will be a quick double beep.

[5] Now release the power button and Connect the Controller to your PS3 using the USB cable.

[6] Immediately you will notice some options on the PS3 screen, where you are supposed to choose Restart System.

[7] You will be taken out of safe mode and your PS3 restarts itself.

[1] Force shutdown may end up in losing saved data on your console.

[2] Safe Mode is only available on PS3 when system software 2.60 or greater is installed.

Related: How to Update PlayStation 3

You can restart your PlayStation 3 if your system freezes and you are unable to perform any task on it. Also, for any issues like software and hardware malfunction, a system restart can be the initial fix. If that does not help, one might try hard to reset.