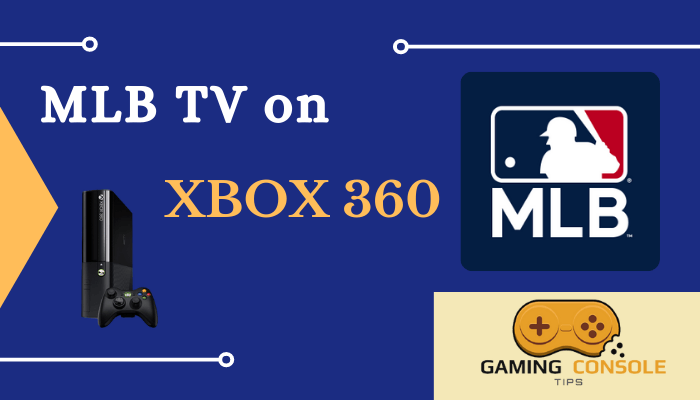 One of the great ways to stream Baseball on your Xbox 360 console would be MLB TV. It is also referred to as Major League Baseball TV. As the name stands, MLB TV is the hub for streaming major Baseball leagues. Moreover, it features an expanded library of on-demand content like classic programs, documentaries, and more. You can stream it through subscription plans with premium features, covering live MLB games from Opening Day to the World Series.

1. Start your Xbox console and go to the home screen.

2. Use an analog controller to open the Apps tab on the horizontal menu bar.

3. Open the App Store and search for MLB TV.

7. Scroll to the TV tab on the horizontal menu from the home screen.

8. Select MLB.TV under the TV menu on your Xbox 360 console.

9. Enjoy using the app on your Xbox console. You can also stream MLB TV on PS4 [PlayStation 4].

2. Navigate using ⇦ ⇨ keys and highlight the System option and open it using the button on the controller.

4. Choose the Connect Devices on the vertical menu on your Xbox 360 controller to open the Devices menu.

5. Make sure that the following options: Xbox SmartGlass Apps and Play To are checked or toggled on.

2. Browse for Xbox Smartglass in the search bar.

3. On the results, look for the app titled Xbox Smartglass.

4. Open the app details screen and click Install to install the app on your Android smartphone.

5. Make sure the Xbox 360 and your Android Smartphone are connected to the same WiFi router.

6. Open the Xbox Smartglass app, and it will automatically connect to your Xbox 360, but to stream media following the steps in the next section.

2. Open any highlights or games in the MLB TV app.

4. Enjoy watching games from MLB TV on your console.

Yes. MLB TV app is free to download on Xbox 360 and Xbox One. But to watch the live shows, you would need a subscription to any premium plan with MLB.

What features does the MLB TV app offer?

Related Topics:MLB TV
Up Next

How to Stream Funimation on Xbox One

How to Connect PS4 [PlayStation 4] to Wi-Fi

Sam is a tech enthusiast, who has keen interest on technology and loves to explore new innovative tech products.