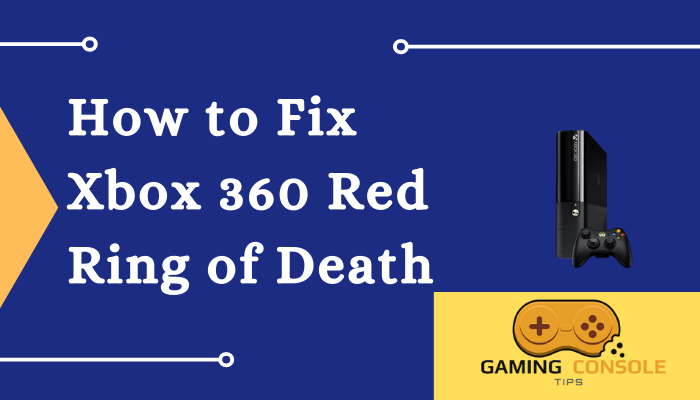 Though you have been using the Xbox 360 for many years, you may not have a clear idea about the Xbox 360 red ring of death. It is the four LED lights around the power button which is available only on the original Xbox 360 consoles. In online terms, it is known as RRoD. If your Xbox 360 console works without any problem, the LED will flash green. But if your console experiences an error, then one of the LEDs will start flashing red. The Red Ring of Death issue on Xbox 360 can be easily resolved, and you can start playing the game anytime.

How to Fix Xbox 360 Red Ring of Death

How to Fix One Red LED ( Red ring of death)

2. Disconnect all the devices and controllers that are connected with your Xbox 360 console, including the power cords.

3. Next, press the release button on your console to take away the external hard drive, which you can find on the top of the console.

4. Once you take out the hard drive, wait for a few seconds. Now, plug in the Power cord and turn on your console and start connecting the accessories one by one.

5. If the error occurs when you connect the particular accessories, fix it properly or connect the new one to avoid the issue.

6. After connecting the accessories and controllers, turn off your Xbox 360 console and insert the hard drive.

7. Once you insert the hard drive, reboot the Xbox 360 console and check whether the error appears again.

8. If the error appears again, contact Microsoft support to solve the issue.

Related: How to Connect Xbox 360 to TV

1. If your Xbox 360 console is overheating, the first thing you need to do is Power off your Xbox console completely.

2. If you have placed the console in a crowded place, relocate your console to an open and well-ventilated place and make sure it is nearby your TV.

3. Leave your console turned off at least for one hour, then reboot your Xbox 360 console.

1. Check the power source connected to the TV. If the LED on your power cord lit green, then the problem is with the Xbox console.

2. If the LED blinks red or orange, you can disconnect the power cable and try your console with another power cable.

3. Next, check whether the LED on the console is lit red even with the power source with the green LED.

4. Try buying the new console or shut down your console completely.

5. Remove the accessories and external hard drive from the Console. Reconnect everything again to check whether the problem is with your accessories.

6. If you find an error while connecting the specific accessories, replace the new one to fix the issue.

Related: How to Fix Xbox 360 Won’t Connect to WiFi

1. Turn off your console and disconnect the cable that is connected to Xbox 360 and TV.

2. Wait for a few seconds. Connect the cable again to the TV and to the Xbox 360 console. If the problem persists, you need to replace the cable, and you can buy it from any online store.

Thus, you can resolve the Red Ring of Death on the Xbox 360 console with the identification of the error and rectify it with the power Restart. You can also contact the dealer for a warranty claim if it happens within the warranty period. In case of any doubts about the above steps, please mention them in the comments below.

Yes, You can fix the Xbox 360/ Xbox 360 Slim red ring of death using the basic troubleshooting steps. First, you need to identify what sort of error code is shown on your TV and fix the problem.

What causes the Xbox 360 red ring of death?

The error code appears when the hardware on your console fails. Otherwise, the power supply for the console faces an improper connection. It causes the Xbox 360 red ring of death.

How to Get Paramount Plus on PS4 [PlayStation 4]

How to Connect PS4 Controller to PC