How to Connect PS4 [PlayStation 4] to TV 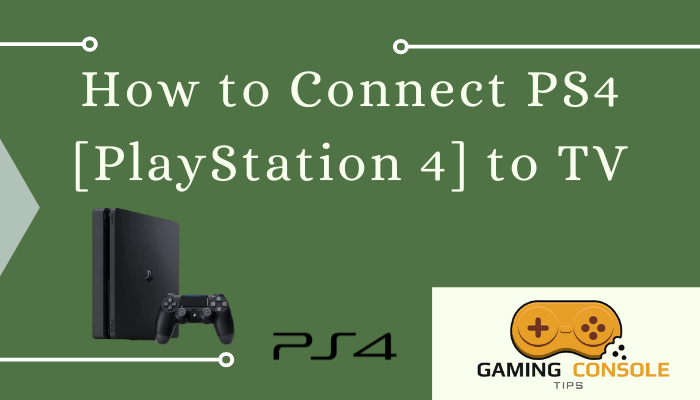 PlayStation 4 or PS4 of Sony is a well-equipped gaming console with excellent controls. It carries the Blu-Ray player that making it one of its best features. Moreover, it provides content with 1080p or FullHD video output. At the same time, PS4 Pro is the third major update to the PS4 range, which is even capable of 4K output. You can connect the PS4 console to any smart TV, including Android, Roku TV, and Fire TV.

How to Connect PS4 to TV Using HDMI Cable

1. Connect one end of the HDMI cable to the HDMI out port on the PS4 console.

2. Plugin the other end of the HDMI cable to the TV’s HDMI In port.

3. Now, take one end of the Power supply cable and plug it into the AC Outlet.

4. Insert the other end of the power supply cable into the power in port on the PS4 console.

5. If you are using a smart TV, then look for the video source icon ⍈, and on the Video Source screen, change to HDMI Input.

6. Power on the PS4 console by pressing the Power button.

7. Enjoy streaming Blu-Ray movies and games on your TV.

Related: How to Connect PS4 Controller to PC

How to Connect PS4 to TV without HDMI

You can also connect the PS4 to the TV without HDMI using HDMI to RCA-C Cable. An HDMI to RCA-Coaxial is a converter cable for the HDMI port and Composite cable port. One end has HDMI male connector, and the other end consists of cables with three colors, yellow for video, white for the left audio channel, and red for the right audio channel.

1. Connect the HDMI end of the HDMI to the RCA-C cable to the PS4 console.

2. Connect the other end consisting of three colored wires to the TV.

3. Connect the power cable of the PlayStation 4 to the Power Source.

4. Launch the PS4 Console and choose the game to play.

5. View the game streaming on the connected TV.

Instead of HDMI to RCA-C Cable, you can also use the HDMI converter to connect the PlayStation 4 to the TV. In the HDMI Converter, you must have an HDMI cable as well as a Composite Input cable (Red, White, and Yellow cables). In case the TV has a DVI input port, then you need to use a DVI converter to connect these cables for delivering the PS4 output on the TV. You can also connect Keyboard and Mouse to the PS4 for effective gaming controls.

How to connect PS4 to TV without HDMI?

You can easily connect PS4 to TV without HDMI using an HDMI to RCA-C cable.

Why won’t my PS4 connect to my TV?

The following could be the reason for the PS4 console not connecting to the TV:
1. Check your PS4 console HDMI out.
2. Test, whether the video source TV is using, is correct else, press ⍈ on the remote and select the correct input.
3. Make sure that the PS4 console is updated to the latest firmware.

How to connect PS4 to TV wirelessly?

There is no direct option for wireless connection between PlayStation 4 and TV. You can get the PlayStation Remote Play app on your smartphone and screen mirror the app to your TV wirelessly.