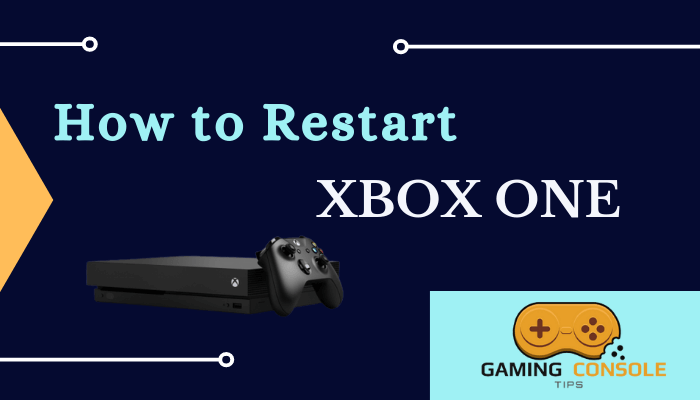 Xbox is a video game brand. There are a total of four series of Xbox consoles. Now let us take about the third series of Xbox consoles which is the Xbox One. Xbox One is a video game console owned by Microsoft. Xbox One is still available and Microsoft regularly updates its software, gives new features, fixes bugs, and more. The restart of the Xbox One could be useful whenever you face issues while gaming. It could also solve the lag or other technical issues. Now let us see how to restart Xbox One.

There are many methods you can use to restart Xbox One. The methods are:

(1) On your Xbox controller, press and hold the Xbox button till a power center menu appears on the screen.

(2) From the available options, choose Restart Console to restart your console.

(3) Choose Restart again from the pop-up box to begin restarting your device.

(1) Press the Xbox button on the controller.

(2) Choose Settings from the Xbox guide.

(3) Select the General option under the Settings screen.

(4) On the General screen, select Power mode and Startup.

(5) From the available option, choose Restart now and select Yes to confirm the restart.

Related: How to Factory Reset Xbox One

In case the Xbox screen freezes, or it doesn’t respond, then you need to reboot your Xbox Console.

(1) Press and hold the Xbox button on your console for about 10 seconds or hold it until you see the screen goes blank to turn off your console.

(2) Press the Xbox button again. You will see the boot-up animation on the screen, which indicates the restart of your console is under process.

Related: How to Reset Xbox One Controller

How to Hard Restart using the Xbox One Console

If the above methods aren’t working, you can try this method to restart your Xbox One.

(1) Press and hold the Xbox button on your console for about 10 seconds or hold it until you see the screen goes blank to turn off your console.

(2) Unplug the power cable from your console and wait for at least 30 seconds or more.

(3) Plug the power cable back into your console.

(4) Press the Xbox button on your console to start Xbox One.

Related: How to Delete Games on Xbox One

(1) How long does it take to restart your Xbox One?

It usually takes about 5-10 minutes for your Xbox one to restart. You can also contact Xbox Support for further help.

(2) What is the black screen of death in Xbox One?

The black screen of death error usually occurs as a result of a glitch in the Console dashboard.

(3) Why do gray screens appear on Xbox One?

If your console does not boot up properly, it can cause your Xbox screen to become gray.

How to Fix When PS3 Controller Won’t Connect

How to Connect Xbox One Controller to iPhone