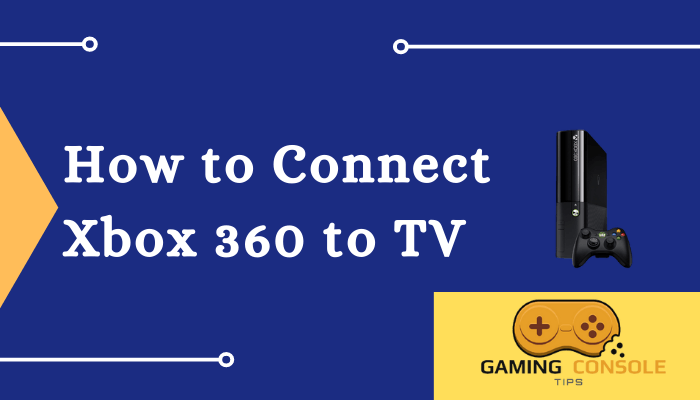 Do you like to play your Xbox 360 games on a big screen and don’t know how to connect your Xbox 360 console to the TV? You are in the right place. In this guide, we are going to explain how to connect Xbox 360 to a TV with four different cables. You need to select the display cable according to the type of your TV or monitor. Many Xbox users are using the HDMI(High Definition Multimedia Device) cable because it gives a good video resolution.

[A] If you are using a newer model TV, you can use an HDMI cable. Both the end of the HDMI cable looks similar and it carries the audio and video on the same cable. Connect the one end in the HDMI port of your TV and the other end on your Xbox 360.

[B] Use a VGA HD AV cable if you are using an old TV. Connect the red(for video) and white(for audio) cables to your TV and the other end to your Xbox 360 console.

[C] If you are going to use a composite AV cable connect the larger end to your Xbox and the other end which contains three cables on your TV.

[D] The component HD AV cable has an HDMI plug on one end and six colored cables on the other end. Connect the HDMI plug to your Xbox 360. If you are using a non-HD TV connect only red, white, and yellow cables on your TV.

3. Once you set up the display cable, connect the power supply to your Xbox 360.

4. Turn on your Xbox 360 by pressing the power button on the console.

5. Next turn on your TV and select the correct input.

6. After selecting the input, connect the controller to your Xbox 360 console.

7. Finally, play your favorite Xbox 360 games on a big screen.

The first two version of the Xbox 360(Xbox 360 core, Xbox 360 20 GB) doesn’t have HDMI Port and doesn’t support an adapter that actually works as the HDMI.

Can I use the laptop as a monitor for Xbox?

Yes, you can use the laptop as a monitor if an HDMI port is available on your laptop.

Why is the HDMI not working on Xbox 360?

The HDMI cable may be disconnected from the rear of your Xbox 360 or the HDMI port in your TV might be broken or damaged. So check whether your HDMI cable is plugged in properly.

Is there a TV without HDMI?

Basically, all TV comes with an HDMI and RCA port. If the TV doesn’t have an HDMI port, you can use the RCA port.

How to Record Gameplay on PS3 [PlayStation 3]

How to Charge Xbox One Controller