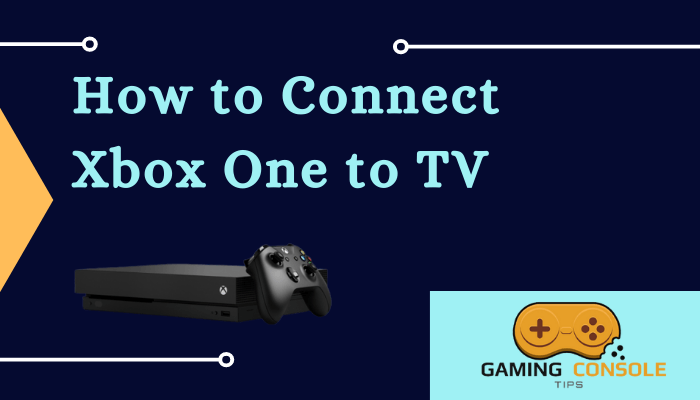 Xbox One is one of the most popular gaming consoles in the United States. There are several advantages like its performance, game pass, etc., which make the console outstanding. Moreover, Microsoft designed their new consoles to meet the requirement of adapting to the games of previous generation consoles. If you are in the initial process of connecting Xbox One with a TV, you can use an HDMI cable. Because that is the only option provided by Microsoft to set up your Xbox One. However, if your TV does not have an HDMI port, you can also connect using a converter.

How to Hook Up Xbox One to TV with HDMI Cable

[1] Connect your Xbox one to the internet, either using the Wi-Fi or Ethernet cable.

[3] Additionally, to view cable or satellite TV shows on Xbox One, you need to link the set-top box of your TV with the console. To do this, connect one end of the HDMI cable to the HDMI In port on the console and the other end to the set-top box.

[4] Next, connect your Kinetic sensor to the console using the respective cable.

[5] Finally, connect your Xbox One to the power supply and then turn on your device.

After the initial setup, follow the on-screen instructions to complete the basic mandatory setup on your Xbox One.

How to Connect Xbox One to TV without HDMI Cable

Your TV might not have the HDMI port in it, but most TVs do come with AV receiver ports. These are the ports for Red, White and Yellow cables, which transmit audio and video in the older generation TVs. HDMI replaced this audio and video transmitting dual role now. Therefore, a simple suggestion is to buy an HDMI2AV converter.

[1] Connect the AV cables to the respective ports on your TV.

[2] Then, connect the other end of the AV cables to the HDMI2AV converter.

[3] Plugin the HDMI cable to the HDMI Out port on your Xbox One console.

[4] Now, connect the other end of the HDMI cable to the HDMI2AV converter.

[5] You can now power up your converter using a USB cable and turn on your Xbox One.

Note: In case your TV has a VGA port instead of the AV port, then you have to use an HDMI2VGA converter. These converters are easily available at an affordable price in local stores.

Related: How to Connect AirPods to Xbox One

How to Connect Xbox One to TV Wirelessly

Windows 10 PC can help you connect Xbox One to TV wirelessly with its casting ability. Make sure to connect both the Windows 10 PC and Xbox One to the same Wi-Fi network to enable this feature.

[1] Head to the Store on Xbox One and install the Wireless Display app.

[2] Next, tap the Connection icon from the app on your PC and select your console to connect with.

[3] From the Action center on your PC, select Project.

[5] Select the name of your TV and connect with it.

This wireless display app allows us to choose the controller between the gamepad and keyboard or mouse control modes by pressing the menu and view buttons. Alternatively, you can also get the Xbox Console Companion app on your Windows 10 PC. You can also connect the Xbox 360 console to the TV.

How to connect Xbox One controller to the TV?

Turn on your Xbox One controller and then turn on the Sync button on your controller. Now on your TV, enable the Bluetooth option under Settings. Search for available devices and then choose the controller.

Do all TV models support Xbox One?

Can I connect Xbox One to Vizio Smart TV?

Yes. You can enjoy playing games on Xbox One console from your Vizio Smart TV.

Why can’t I connect Xbox One to my TV?

Check whether you have connected with an HDMI cable that came along with Xbox One. If not, connect using Xbox cable and try again. You can also restart the Xbox One console and connect to the TV.

How can I connect Xbox One to old TV?

If your old TV doesn’t have an HDMI port, then you can use a converter to connect your console with the TV.

How to Connect Keyboard and Mouse to PS4 [PlayStation 4]

How to Connect Bluetooth Headphones to PS3 [PlayStation 3]